The 2017 Pro-Jallikattu protests were an apolitical movement led by the people of the Indian state of Tamil Nadu against the Supreme Court ruling to ban the bull taming sport citing animal cruelty. The sport goes as far as 4 BC to the Sangam era of Tamil Nadu's ancient history. The festival of Pongal, Sankranti and Onam in South India marks the occasion of harvest season. The uniqueness of Tamil culture lies in the celebration of "Mattu Pongal" paying respects to the cow species. The bull taming sport is formerly known as "Eru Thazhuval" and later came to be known as "Sallikattu" and then "Jallikattu". Jallikattu is celebrated during the second day of the Tamil Thai month. The festival is also seen as a foundation for breeding science for bulls. Cows in Asia and Africa are known as Bos Indicus. The genetic beauty of this breed of cows is characterized by the hump at their backs. During the sportplay, the participants are allowed to hold the hump of the cows over 50 feet and the challenge to retrieve the gold coins in a small clog bag tied to one of the horns of the cows. Any attempts to hurt the cow by twisting the tails, applying spices to its eyes or breaking the horns will lead to long term disqualification of the players. The bulls which are able to cross over 50 feet without any problems is allowed to go for breeding in the next month. The bulls which fail to do so are sent to farmlands to be used for labor work and not used for breeding.

Since 2010,the farmers of Tamil Nadu and their welfare groups were at loggerheads with the PETA India, an animal rights welfare group who demanded for the outright ban on Jallikattu and its similar counterparts in Karnataka called Kambala. PETA India filed a lawsuit to the Supreme Court of India claiming Jallikattu to be inherently cruel. PETA India was able to lobby for it and win the case without giving proper resources for the respondent to answer for it. Additionally, the comments of intellectual columnists in India irked and hurt the sentiments of the Tamil farmers and the Tamil people. The protest started as a small event in Marina Beach,Chennai and with the support of students from several parts of the state, the protest became a revolution and was named as the "Thai Puratchi". The beauty of the protest lied in the down to earth non-violent approach of the Tamil people to the issue where over the span of 15 days, 5 lakh people gathered in Marina Beach,Chennai and several other thousands of people all across Tamil Nadu and India. The International Media called it the TN version of Arab Spring and praised it as a true representation of ahimsa laid by Mahatma Gandhi. The unique nature of the protest was that no political party backed the movement, youth and family alike protested without any single incident of misconduct among the crowd, and most importantly the first ever mass protest organized and fueled through social media. People from all walks of life who didn't know each other joined the protest to show their spirit of culture and respect for tradition.

The protest received worldwide support from Tamil people all around the world. Several students studying in United States, Canada, Germany, Australia etc.,and working professionals all over the world gave their support through social media. The Tamil expat population worldwide helped to spread the message of Jallikattu and made other people aware of their culture and played an instrumental role in helping the movement back home. The support was shown in form of protests, flash mobs, art performance and much more which made the entire world take notice. In Texas, Tamil students in University of Texas Arlington and University of Texas San Antonio gathered and showed their support on Facebook.

San Antonio, being a diplomatically connected sister city of Chennai had its share of contribution. The students of University of Texas San Antonio and San Antonio Tamil Sangam worked their way in gathering support and spread the message of Jallikattu through demonstrations in social media. It was also joined by students studying all across the United States in places such as California, Arizona, Texas, Virginia etc. 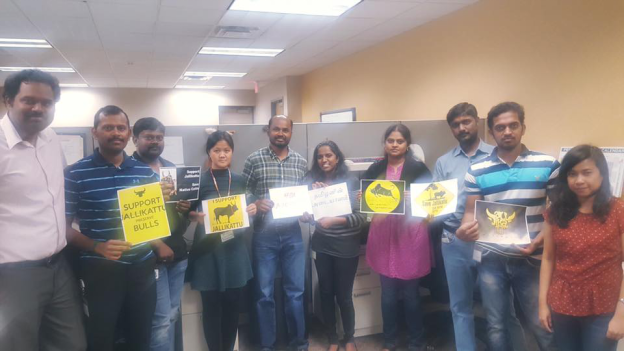 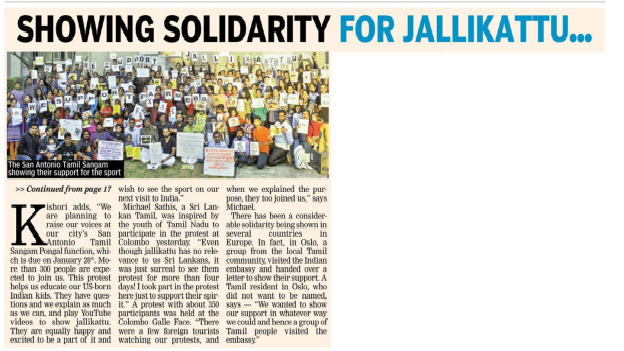 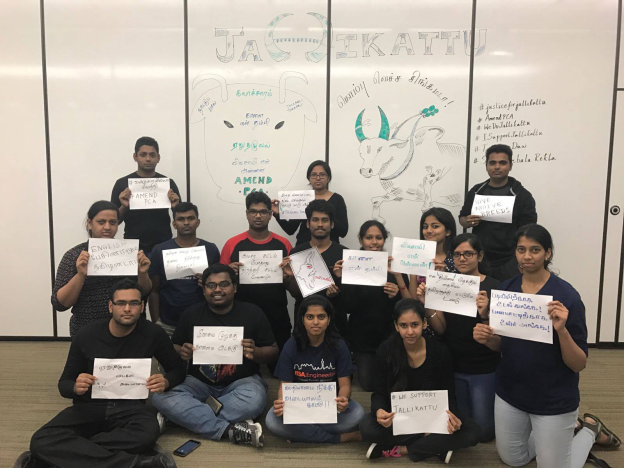